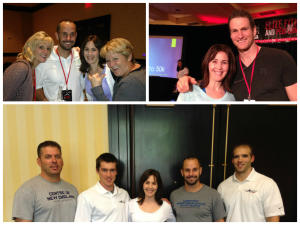 At the Elite Training & Performance Summit (ETPS), not only did I learn new facts and findings from leaders in my field, I got recharged, had fun and reconnected with people I only get to see a few times a year.

I really needed this time. Heading out to the ETPS, I had been stressed, not sleeping well, starting to get a cold and feeling stuck. Stuck in several areas of my life.

Here’s a quick story: My first flight out was cancelled. My second flight was delayed nearly three hours which means I wouldn’t be getting to my hotel until past mid-night (I’m usually in bed by 8:30 so this was gonna’ hurt!). My cold and cough was starting to come on stronger and I missed the pre-conference day. Ugh!

I see this guy get on my plane and had a very strong feeling he was heading to the same conference I was. After we landed, I thought “I’m going to catch up with him so we can split the a cab fare to the hotel” and that’s exactly what happened.

After 10 minutes in the cab, I was already becoming recharged and happier and motivated. This guy loved life, God and all people, and it showed! When I finally asked his name and he said Dave Jack, I knew why I had always heard is name spoken with admiration, respect and just plain awesomeness!

This guy didn’t inspire just me; he captivated the other 249 attendees and connected with people on a pretty deep level.

So again, to make a short story long and answer the question: What does this have to do with reaching your goals and not giving up?

It’s just to remind you that you’re not an island. Go and be with people who will inspire you, teach you, bring you up and pull you along when your down. It’s the relationships that matter and can make all the difference.

Don’t give up. Surround yourself with people who see your greatness!

Are You Having Trouble Actually Starting Your New Year's Resolution? In my last post, I…

Get Up and Go Guacamole

It's Super Bowl weekend and my friend, Csilla Bischoff of ShiningHealth.com, came up with a…

Is there a perfect time to start your “eat healthy, exercise plan”?

Remember when you were starting to think about having kids, and you thought, "Is this…