Despite the early snowstorm and havoc it is still causing (major power outages still disrupting school and work schedules/thousands still without power) we went ahead with Flemington Boot Camps “mini” open house to celebrate our new location inside of the ATA Martial Arts studio at 67 Church St. in Flemington.

It was called “mini” for two reasons. One, reason is that while Flemington Boot Camps has been in business for about one year, we are still being sheltered by another studio – in the next year or so we’ll have our very own space to call home. The second reason we called it a “mini” was because our guest speakers took only 15 minutes each to show us some great stuff!

As a busy mom myself, I know how my boot camping moms have places to be and things to do and only have a few free hours in which to do it all!

Here’s what we did:

-How to get greens into your diet by Melissa Pickell of New You Nutrition.

We ended the morning with a quick energy boosting smoothie to help campers restore and repair! 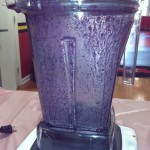 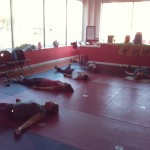 Some campers being guided into an aware state of relaxation 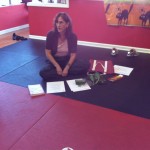 Thanks boot campers and guests!

By the way, you can go to Face Book and Like Flemington Boot Camps to see the yummy smoothie recipe!

Will You Stick With Your Program?

6 Tips to make sure your workout actually happens

Tomorrow you are going to exercise. You've made the decision and you are really going…

Do your shoulders feel "tight" or "stiff"?   How well can you reach one arm…